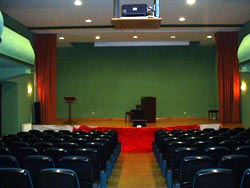 Cultural Centre
The Cultural Centre is located in “The House of the Town”, and there , varied activities are offered such as screenings, music lessons, exhibitions of paintings and photographs, dance and drama lessons ,handicrafts and cultural courses.

Besides, other activities are being organized and developed by the County Council each year. They are usually concerts, theatre, story-tellers, etc…Like a concert or a private activity, upon request of the local City Council of Barruelo.

The House of the Town, was built by sindicalist miners of Union UGT during the second decade of the XX century. It was opened in 1920 and for the opening acts Pablo Iglesias attended. It was then Barruelo the first Socialist grouping of Castilla y Leon, this house going to host of this group. From this house, magazines and newspapers such as “The Socialist” and “ The Light”, were launched, both of them of wide circulation, some of them came to have more sales that newspapers in the capital.

At the end of the Civil War, this house became the headquarters of the Vertical Union. When the democracy arrived, the house returned at the hands of the UGT, which was its legal owner, settling back into again, the headquarters central office of the Union and the PSOE.

In this way, the house became part of the Interpretation Centre of Coal Mining, becoming the cultural centre, that now houses and still we know as “The House of the Town”.

It is located at Jorge Manrique street, and its doors are opened according to the schedule of activities that take place there.